Posts that will display on the news feed.

Posted on August 22 by admin

1 week to go until our netball camps start and we have a fantastic star line up of coaches including England Internationals and superleague player/coaches:
Kadeen Corbin/Serena Guthrie/Eboni Beckford-Chambers/Lindsay Keable/Rosie Allison/Layla Guscoth plus more.
This is a superb opportunity to be coached by the best in the sport!

Posted on July 13 by admin

Experience the unexpected! This is a reaction trainer with a difference (Sane and insane sides) The ball returns erratically, testing and improving your reactions and hand-eye co-ordination.

Posted on June 28 by admin

England Netball can confirm that the following squads have been selected for international clashes against sides including Jamaica, New Zealand and Australia in the coming months. First up for the national team is an intriguing three match International Series versus the Sunshine Girls in September. Our Caribbean visitors are rated just one place above England at third position in the world rankings and this trio of games are sure to produce plenty of on-court fireworks in Birmingham, Liverpool and Sheffield. The fifteen players selected in the Jamaica Series squad are;

11 of the 15 squad have coached at net-it camps and 5 and coaching for us this Summer!

Posted on June 27 by admin

net-it are dedicated to offering inspirational netball, hockey and rounders coaching and development camps to players of all abilities at camps in schools, colleges and clubs around London, Surrey, Sussex, Berkshire, Hampshire and Kent. 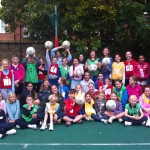